In a previous article I wrote about how to explore positions when playing melodies. Using the original position may not be the best choice for you depending on what you want to do. I have received questions on how to do this practically so in this article I will outline a process on how to change position.

The rough process to change position is very simple and either require a little bit of music theory knowledge or a cheat sheet. Follow below to to see it in practice.

Also remember that when you change to a new position on a harmonica you will also change the key you are playing in.

Now let’s look at the process above to change position of “Jingle Bells” that we used as a start for exploring positions. Below you see it as a reminder.

Below you find the the melody translated to scale degrees. If you combine the infromation you should end up with the translation below.

Below you find the mapping between scale degress and second position tab symbols. As yuo can see I added the 3” to get the second scale degree in the low octave. Also the b7th is there but not the 7th.

Finally the melody translated from scale degrees to second position tabs. Simply combine the information from the images above.

As you can see it is not all that difficult to move tabs from one position to another. Why not try it yourself. For my subscribers I have included a “How to Change Position Cheat Sheet” PDF in the Welcome package to make moving between first, second, third and fourth position quick and easy. With the cheat sheet you don’t have to first go to the scale degrees, it is done for you.

Some time ago I wrote an article on why we may chose to play in different positions. Second position is the what most blues players chose for their day to day needs. With this article I would like to challenge you to start exploring positions a bit more. Since it is close to Christmas when I write this, I will use Jingle Bells as my example.

If you find tabs for melodies it is most likely written in first position. These are often quite simple to play on a diatonic harmonica. However, the possibilities for using the strength of the harmonica for expressions and sounds might be limited. I the picture below you see tabs for “Jingle Bells” in first position. Try it out, it is not too difficult.

While you play it, think about how it sounds. Do you want to add something? Does it sound interesting enough? Asking yourself these questions i key when exploring positions.

Which one do you prefer? Do you get more chances to express yourself? Whas it harder or easier?

The next time you are playing a melody, don’t just play it everyone else plays it. Take some time exploring positions that might give you a better sound.

I have previously written on what is important when doing covers and how to practice and prepare properly. Now it is confession time, let me tell you what happens when your harmonica rehearsal routine is not up to par. A few weeks ago I was preparing for a gig with my trio “Worn Out Soles” and felt very confident. Not all results were as expected though.

The preparations started out pretty much as they always do. We made a list of our repetoir and started playing around with the set list. This time I wanted to add a new song, namely SBWII’s “Help me”. I have had my eye on that song for some time but haven’t felt quite up to it. Now I felt it was within my powers to play so it got put up on the set list. I wanted the chords bombs to be there, solo close to SBWII and the bass line hook played by one of the guitars. The more we practiced the better it sounded, the chord bombs were aggresive, the solo was coming along and there was a nice groove.

At this point Pirs, one of the guitarists/vocalists said “hmm, we really should practice with all the gear”. Me and Magnus, the other guitarist/vocalist, agreed and then we kept doing what we were doing. At his point I should have recognised that I was heading for harmonica rehearsal one bad.

To be fair we were practicing the way we usually practice and it has served us well so far. What I didn’t realize was that this song, “Help me”, required different microphone technique than what I had practiced before.

When it was time for the gig we felt prepared and did a nice job overall (if I can say so myself). However, when we got to “Help me” that was at the end of the set I quickly realized what I had missed in my preparations. I was singing and playing harmonica acoustically into a Shure SM58 and I wanted to keep my mouth close to the mic so that my voice didn’t sound too thin. This meant however that I had very little time to move my head back, bring up the harmonica, do the chord bomb and reset for singing. Since I hadn’t practice this, it really shook me up. Basically I messed up a whole bunch of the chord bombs, some of the vocals as well as part of the solo. I half panicked in the heat of the battle. 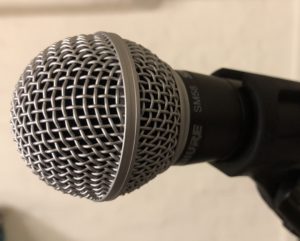 The microphone that caused me problems.

Overall the audience was happy and we got great feedback. For me, however, the experience was tainted by the fact that I could have done a much better job. Fortunately I can now take this as a learning experience and not skip realistic harmonica rehearsal with ALL equipment next time. If you are not rehearsing ralistically I suggest you start now!

If you have any questions or comments just leave a comment below or send me an e-mail. Sign up below to get the Welcome package and exclusive content!

Anyone who has ever thought about making harmonica song covers has had to ask the question, “how exact should I be?”. This question is valid both for the harmonica parts as well as the backup. In this article I will discuss a few considerations you will have to make depending on what you are looking for.

Why are you making harmonica song covers?

A good starting point to look at is why you are making covers. Are you expanding your repetoir for your band? Is learnings new songs to challenge yourself your focus? Are you trying to pinpoint exactly what makes a player unique? Is it a tribute? When you understand why you make the covers it is much easier to figure out what to do with the song. Harmonica song covers is a great way of challenging yourself.

If you are studying an artist to learn the style or if you are making a tribute to the artist you should probably aim to capture the essence of the artist. Try to capture the tone of the artist by dialing how the texture of the tone changes in the song. Using the exactly same riffs as in the original is definately a very valid approach. If you choose to improvise instead then make sure that you follow the always do, sometimes do and never do of the artist in question.

If you want to cover a specific song (and the song is the focus) you may also have to consider the other instruments used in the recording. The closer you are , the closer your sound will be. Maybe also lok at the equipment the artist used.

To build repetoir you can freestyle a bit. Most likely you should keep something of what the artist would do in your interpretation. It is up to you and what you feel comfortable with.

If you are working with a song that has components that give the song a very unique quality you better keep that in your cover. An example is a song like “Help Me” by Sonny Boy Willimanson II. It should include the backup lick from the band, the chord bombs and be played in second position. The fact that this is a minor blues may tempt some players to go for third position. I think that makes the song lose part of its identity. The fact the SBW forces second position on this song makes it unique.

No matter which I approach you choose for harmonica song covers it is great fun doing it. If you haven’t done it before I think you should start now. Let me know how it works out for you!

Some time ago my first harmonica mentor, Dick Sjöberg, reminded me of a strategy we discussed in one of his workshops. The strategy originally comes from Carlos del Junco and is a way of learning harmonica songs efficiently. Without even thinking about it, I have been using this strategy and it is working great. This article will give you a short introduction to it and how to apply it when you practice.

The short version of this startegy is, start at the back. Saying it like that doesn’t make it sound all that impressive but bare with me for a minute. If you think about it for a while and consider always learning a song or a phrase from the beginning it is quite obvious that you always get to the part you don’t know at the end. By starting at the back, you always start with the part you know the least.

When using this strategy for learning harmonica songs I have modified or expanded it a little bit. Here is usually how I use it for a song with for example 6 choruses of harmonica tabs.

Bar 12 is a good starting point when learning a new chorus.

It may seems like a lot of work but a lot of the small steps you are taking are actually very quick. A nice side benefit of this strategy is that for a song with a head that repeats at the end you can  chose to perform it already when you have learned the first and last chorus and then improvise for the other choruses.

Why it makes you learn harmonica songs faster

In my opinion the power in this strategy comes from the fact that you concentrate the mostat the beginning. You will constantly be repeating the part you know the least and move into parts that are more familiar. This also means that if you stumble and start over you instantly repeat the part that gave you troubles. You also avoid the trap of first playing what you know, then realixe that the unfamiliar part is coming up, panicing and having to start over.

Try this out for your next couple of harmonica songs and let me know how it works out for you. If you enjoyed the read please like and share. If you haven’t already sign up for the newsletter below to get the Welcome package and exclusive articles!