When I started playing harmonica playing solos was what I wanted most. Since then I have become much more interested in other aspects as well. In this article I want to push for combining harmonica and vocals. There are advantages you maybe haven’t considered.

Who is most important?

When I have been to workshops with Joe Filisko he has often told the class that as harmonica players we have to count on being considered the least important person on stage. It may not be very obvious all the time but I can certaily realte to this statement. I think this partly comes from the fact that many people see the harmonica as a secondary instrument and a bit of a novelty. A great way to get around this is to add vocals to your repetoire. If you also sing you are instantly transformed to the most important person on stage. This reason alone is enough to warrant combining harmonica and vocals.

Getting rid of air

For blues players the harmonica is primarily an inhaling instrument. Singing is of course done exhaling (at least mostly). The combination is a good way of getting rid of air for more harmonica playing and getting air into the lungs for singing. Because we use the air differently this makes for an easy combination and is therefore also less complicated than people think.

Vocals and harmonica share a lot when it comes to the expressiveness for music. If you practice singing you will notice interesting ways of phrasing lines that you can tranfer to your harmonica playing. Well executed phrasing and use of dynamics can really enhance a harmonica performance.

If you combine harmonica and vocals you will also automatically need to become better at fills. When you yourself is the singer you cannot step on the your own vocal lines. The improved fill skills will be appriciated when playing with other singers.

As you can see there are great advantages for combining harmonica and vocals. The last one I would like to mention is that it is fun. You are already putting yourself in the spot light as a musician, why not take full advantage of that spot?

Let me know how it works out for you and don’t hesitate to contact me if you have any questions.

Don’t forget to sign up below to get the Welcome package and exclusive articles!

At one point or another in your musical career you will probably want to make your harmonica performance stage debut. Even if you are not aiming to become a professional player it is something I recommend. It can be quite a scary step to take but if you follow my little guide it will go a lot smoother.

Where to make your stage debut

First of all, in this guide I will focus on you making your stage debut as an individual. Doing it as part of a band is a whole other matter. The places you should look for should advertise either a jam or an open stage session. In these cases you will normally find a house band that provide the backup and a jam leader or keaper of the list that plan who goes on stage.

Another type of jam might be the informal jam sessions that sometimes happen in pubs and bars. In that case there is probably not a house band but the jam leader may play backup on guitar for example. These informal jams are good practice but do not really give give stage experience. There may not even be an audience.

To find a venue with a jam session or open stage you can either ask more experienced players or search online. If you live in a small town you may have to travel a bit. 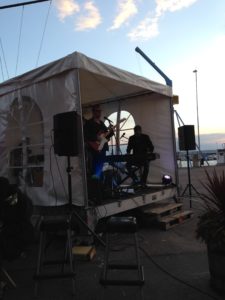 When making you stage debut the stage doesn’t have to be huge.

Depending on the venue you will encounter different types of audience. It might be tempting to choose to play for an audience that is less experienced in hearing harmonica players but I think that is a bad idea. A more knowleadgable audience have probably heard lots of great players before but they are also more likely to appreciate what you do.

Consider three scenarios, you totally make a mess of everything, you make an OK performance or you make a spectacular performance. If the audience is not really interested in music and prefer to drink rather than listen they may boo you of stage in the the first case and probably not pay much asstion to you in the two other cases. However if it is a very knowledgable audience they will love you if you make a spectacular performance, they will appriciate you if you make an OK performance and they will give you points for trying in you mess it up. All in all I think a more knowledgable audience is the better option.

This type of audience is most likely found in blues clubs and venues with well established jam and open stage sessions. Workshops where musicians come to learn is another option for this type of sessions. I chose to do my stage debut at the Harmonica Masters Workshops in Trossingen. An event with some of the best teachers in the world and an audience of some of the best amateur, semi-pro and professional harmonica players in Europe (actually quite a few from outside Europe as well). See how I did below.

When you plan what you are going to play you are probably best off if you chose a song that is quite well known. This maximizes the chance that the band knows the song and plays it the way you expect. If it is an instrumental or you sing yourself you can choose the key quite freely but if you want the house band vocalist to sing you have to be prepared to adapt to his or her vocal range. You don’t wan to end up in a situation where you can’t play simply because you couldn’t agree on a key with the band. If you want to play a semi improvised instrumental you should probably stay as close to a standard 12 bar blues or one of the more common varations.

Communicating with the band

Once you know what to play you have to figure out what to tell the band. In this case less information is usually better. They must know the key, the groove and if the song doesn’t start from the top. It should probably be something like:

The song I chose for my debut may be stretching it a bit as it has an intro and is a 12 bar blues with two variations used (quick change and ii-V-I change). To make this work I had the intro and the chorus printed out so I could communicate it easily to the band.

To be really prepared I recommend that you make your practice realistic. What I mean by this is that you practice the song as if the band was there. This means that you stand up, tell the band what they need to know, count off and so on. Everything you need to do on stage you do in practice. The reason for doing this is that when the pressure is on we default to what we are used to. If you are used to doing everything already you stand a better chance of doing things correctly on stage. If you miss some detail in your preparations you may experience the same thing I experienced in a gig some time ago. I didn’t prepare for the microphone setup so at the gig it didn’t work at all. It was a true harmonica rehersal gone bad.

One thing you can do if you plan to attend a regular jam session is visit it as part of the audience. This will give you a lot of information on how things are run. It is better to know beforehand to take the pressure off a little bit.

Arriving at the jam

When you arrive at the jam or open stage take a look around to find the jam leader or keeper of the list. Talk to him or her and say what you want to do. If they ask you about your experience level just be honest, it is always appriciated. When you have you place on the list, take a seat and make sure you can hear when you are called. Once on stage, do as you prepared and have fun. Don’t forget the audience, they are there to listen to you.

After your stage debut I suggest you hang around for a while. This is a great time to meet new friends and get feedback from other musicians. Who knows, maybe you find a new band or duo partner at the session. You will certainly make new friends.

Now you know a little bit more about what goes into making your stage debut. Do you feel up for it? I may be a bit scary but I can promise that it is well worth it. Afterwards you will feel great and you will have grown as a musician and a human being. So get to it, start looking for the right session for you!